Jazz is an African-American vernacular dance form, choreographed to the beats of a musical art form, which developed around the beginning of the 19th century. This DancePoise article has more on its history... 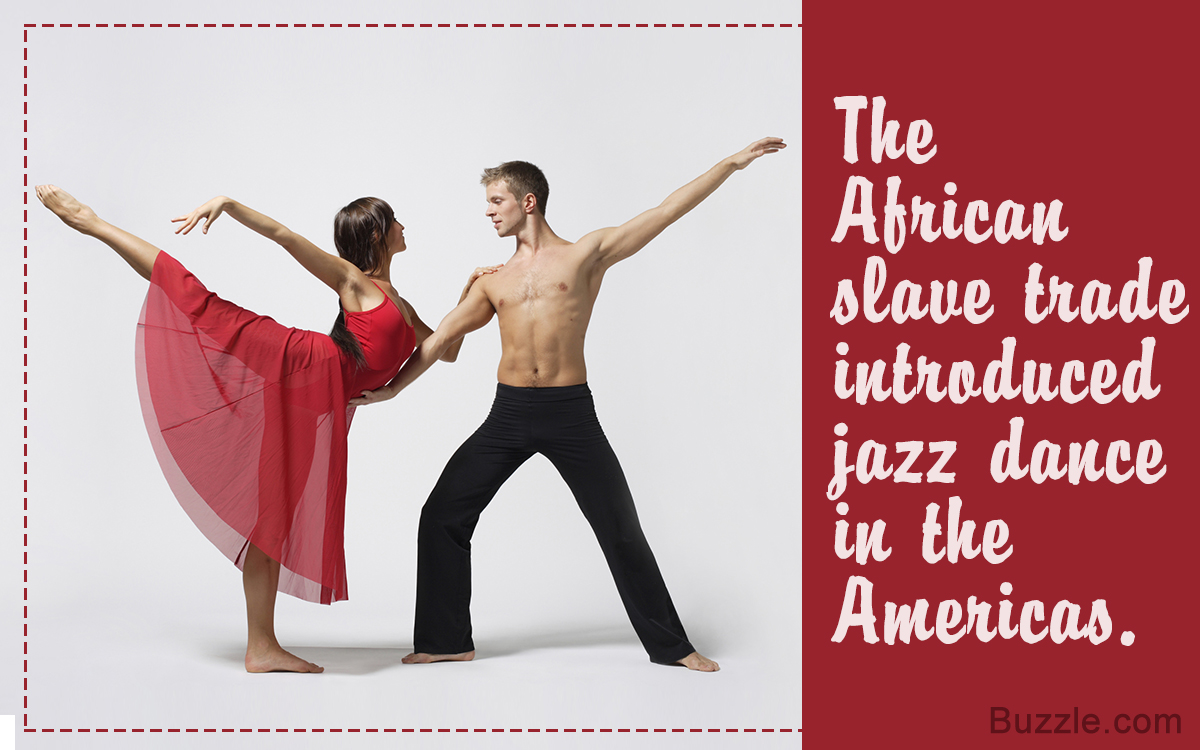 Jazz is an African-American vernacular dance form, choreographed to the beats of a musical art form, which developed around the beginning of the 19th century. This DancePoise article has more on its history… 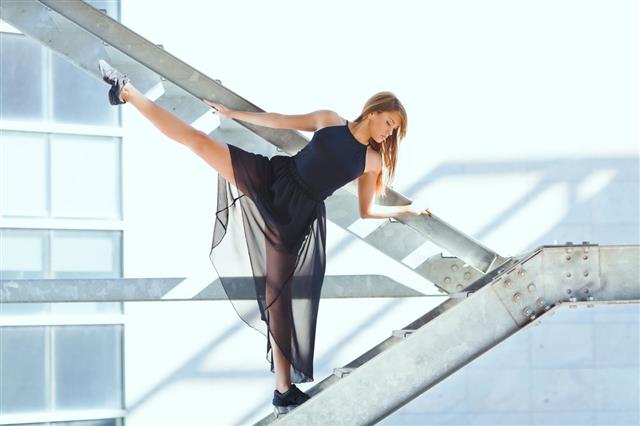 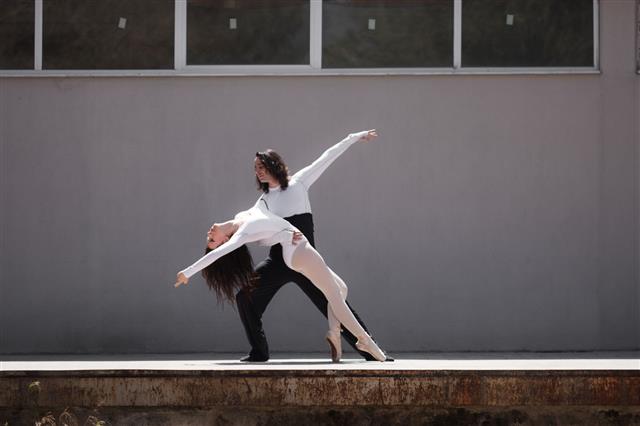 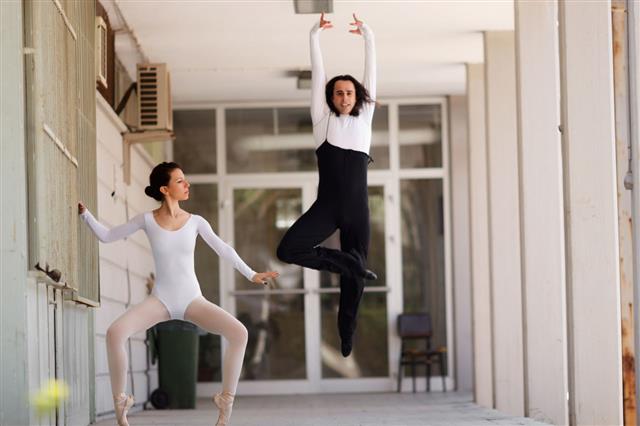 Jazz dancing involves movements that are specially choreographed to West-African music compositions. The movements are termed as jazz, which is basically an umbrella term, and set to ‘blues’ notes, polyrhythms, improvisations, the ‘swung’ note, and syncopation. The Jazz form of dancing actually relates to several dance styles that are related, such as ballet, tap, and the African-American rhythms-and-dance styles.

This dance form originated in the late 1800s. The trend took time to catch on, but eventually did by the mid 1900s. Till the 1950s, jazz dancing was largely referred to as tap dancing, because of the routines set to jazz music. The Jazz Age was characterized by the popularity of dance forms such as the Cakewalk, Charleston, Jitterbug, Black Bottom, Boogie Woogie, and the Lindy Hop. These styles developed at various venues, and were excellently executed by dedicated enthusiasts, who made even the most simplest step look quite elaborate. 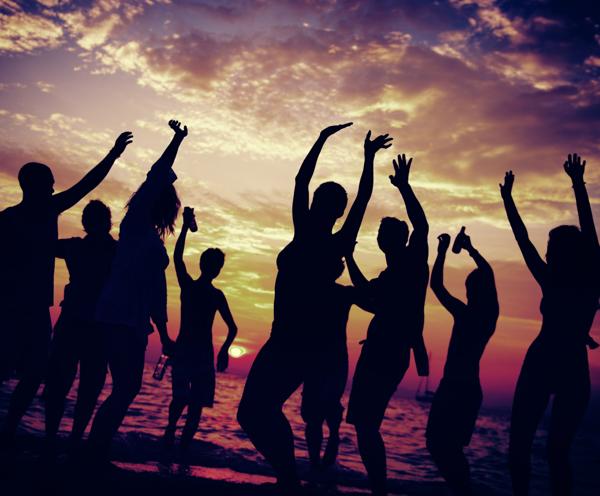 In the early 1800s, when slavery existed in many parts of the world, slave trade was a popular business. It is this slave trade that led to the origination of jazz dance. In African culture, people used to dance in celebration of birth, puberty, marriage, and even death. Taking this tradition forward, slaves also danced as a form of interpretation of life. Their dance was primarily coordinated by drum beats. These slaves were taken to various regions like West Indies and America, and this is how jazz reached the American lands.

Contribution – African music generally accents the second and the fourth beat that gives a rebounding feeling, and thus, the ‘swinging movement’ was formed. The other major contribution of African influence are the polyrhythmic movements, in which individual body parts are moved according to different beats.

The Role of the Church 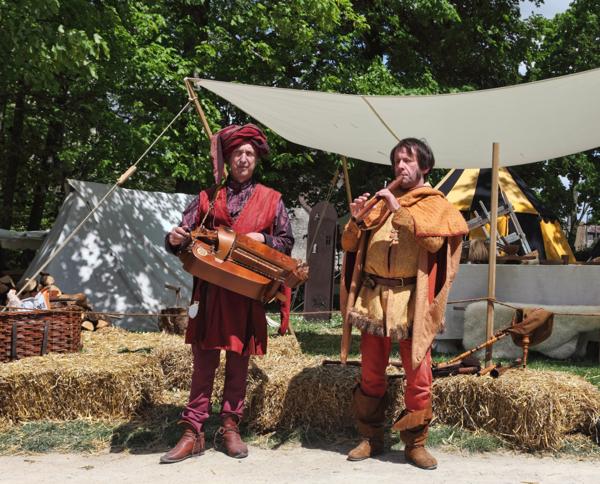 In America, slaves were not allowed to dance, by the Protestant Church. The Church strongly disapproved of any form of dance, by passing the Slave Act, as they thought dancing was sinful. The act also did not allow the use of African drums in any dance form. However, the French and Spanish Catholics allowed slaves to dance to keep them happy and physically fit. Thus, the dances in these regions regained most of the African flavor, that the dances in America lacked. However, the ban did not suppress the African slaves’ interest in dancing. It is during this period that the use of violins (fiddle), quills, and banjos were made while dancing.

Contribution – Due to the ban on drums, the same effect was created by foot tapping, stamping, and hand-clapping, that later formed an inseparable part of modern jazz dance.

Origins of Jazz in America 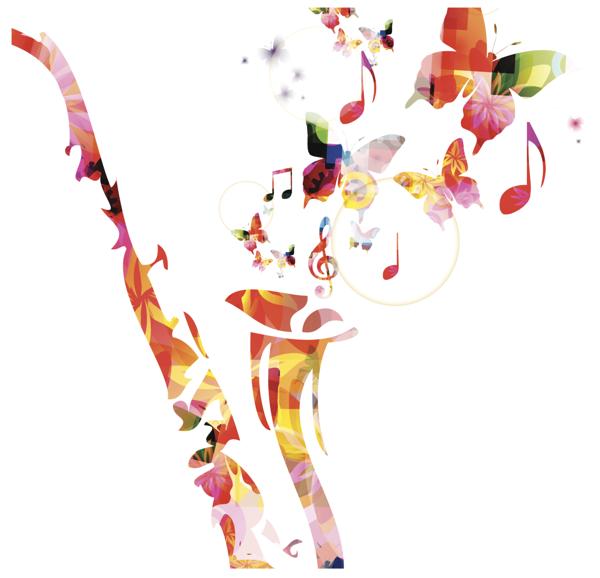 As the ban on African dances was not lifted, the white owners, who found the dance to a recreational activity, started to paint their faces black and perform the slave dance. This became popular, and later on proved to be a major turning stone in the evolution of jazz dance. On the other hand, the dances that were performed at plantations were considered holy or religious. The plantation owners, under the influence of European culture, started the Americanized version of the slave dance. 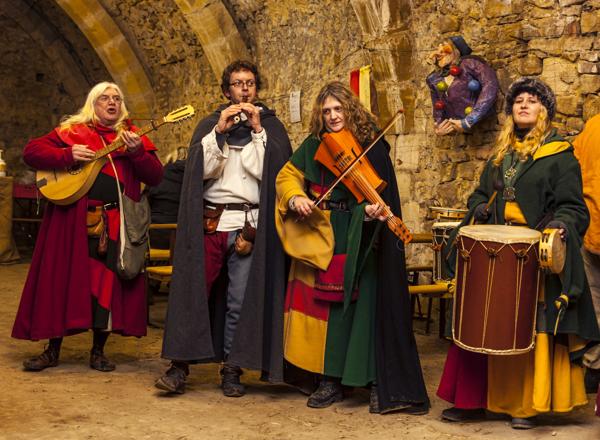 The number of white dancers performing the slave dance increased around the 1850s to 1900s. There were dance troupes that traveled to various towns and performed minstrel shows. In these shows, the dancers portrayed an African-American as an idiot, or someone who had a dandy appearance. The popular imitation of the slavery dance was made by Thomas Rice, in the dance ‘Jump Jim Crow’. As majority of the white dancers in the dance troupes increased, the African-Americans found it extremely difficult to find a place in the troupes. Thus, most of them migrated to Europe in search of job opportunities.

Contribution – Though the minstrel shows were not completely based on African traditions, but still they did contribute to the evolution of jazz. The movements like cakewalk, jig dancing, and the essence, are a result of these shows. 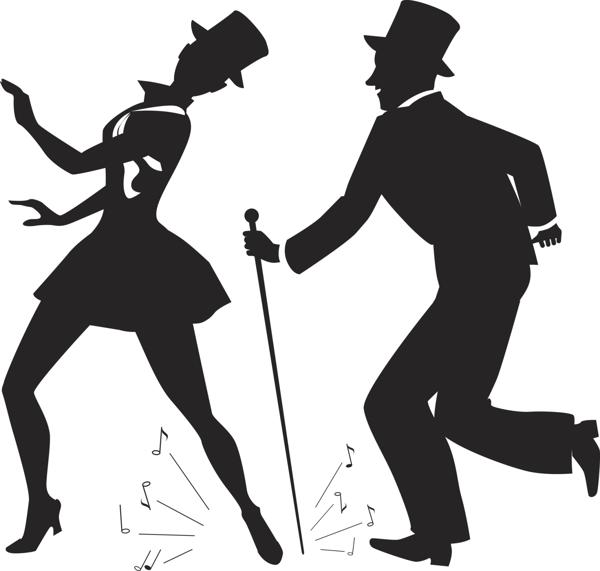 The minstrel shows made way for ballroom dances. Songs were written by African-American composers. Animal dances like the Turtle Trot, the Monkey Glide, the Bunny Hug, etc., became popular even in the high society. The Turtle Trot was performed in the Broadway musical ‘the Sunshine Girl’, by Irene and Vernon Castle. The other dance form that became popular was musical comedies. Different jazz dance steps were performed in these musicals, and the popularity of jazz increased across the world. 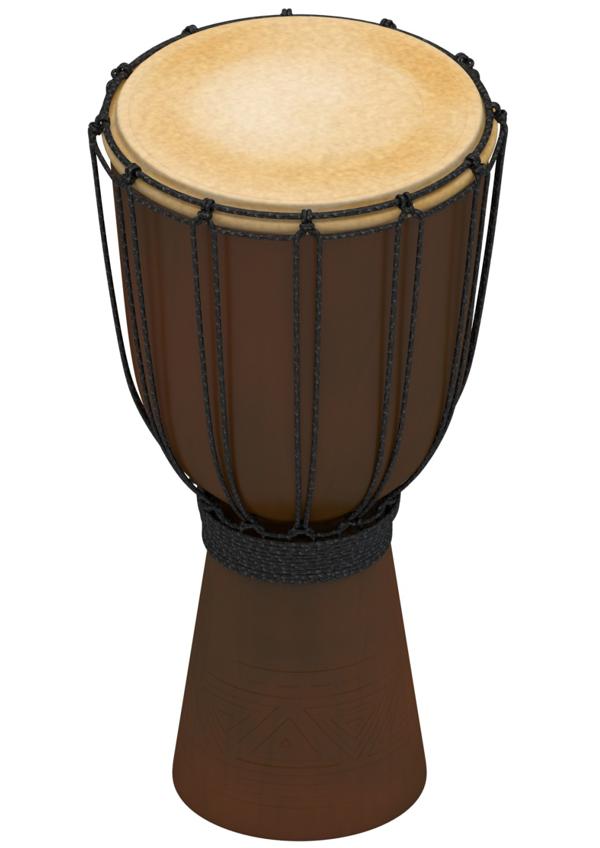 With the change in dance steps, the genre of jazz music also changed. Dixieland jazz music, which had a fast-paced beat, was used in many dancer performances. Many famous composers of that era started to create music for such dance performances. However, post World War II, jazz music underwent many changes. Rhythmic beats were replaced by complex and improvised music. Jazz dancers found it difficult to fit in steps for such kind of music, and the decline of jazz dance, in its purest and original form, began. The introduction of 20% federal tax on the dance floors added to the decline of jazz dance.

Contribution – Swing music by Louis Armstrong, and the Charleston dance, became the basis of popular movements of modern jazz dance. Also, Bill Robinson, an African-American tap dancer, improvised the foot-tapping movement by using just the ball of the foot, rather than the full foot. This technique is still used by dancers across the world. Dances like Lindy Hop and Boogie Woogie became popular during this era.

Rise of a Star 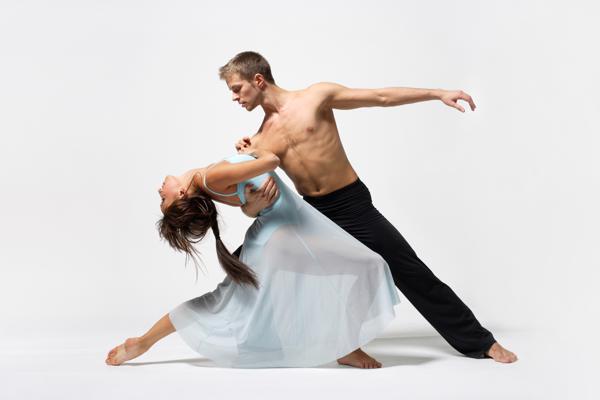 Jack Cole, popularly known as the ‘Father of Modern Jazz’, played the savior to the dying jazz dance. During the time when jazz dances were performed by untrained dancers, Cole created his own unique dancing style. He studied ballet, modern and ethnic dance forms, and was highly influenced by East Indian dance forms. He started his career as a choreographer in nightclubs, and then went to become the biggest name in the world of jazz. On the Christmas Eve in 1937, at a New York nightclub, for the first time he showcased some authentic East Indian dance steps on jazz music. This was an instant hit with the audience, and this dance was labeled as the ‘Hindu Swing’. This marked the birth of the ‘Cole Style’ of jazz. He did choreograph a lot of Broadway shows, but never have a hit show to his credit.

Contribution – The Cole Style was a mix of East Indian, flamenco, and Lindy dance forms. His style was termed as the ‘urban folk dance’. Plie was largely used in his dances along with the second and fourth positions. His dances involved a lot of floor work and torso movements. The sensuality factor of jazz was enhanced by him.

There were other dancers who also excelled in this form of dance, and later went on to become big names in Hollywood. Katherine Dunham was one of the choreographers who played a major role in popularizing ‘theatrical jazz dance’. She was associated with films like Cabin in the Sky, Stormy Weather, Mambo, I’m in the Revue, etc.

Jerome Robbins, one of the most popular names in the dance fraternity, also entered Hollywood. His most appreciated work, the West Side Story, continues to inspire young dancers worldwide. One cannot forget his other successful stage productions like the Pajama Game, Peter Pan, Bells are Ringing, etc. Traces of Latin American music and dance can be observed in his work.

Matt Mattox, one of the dancers in Cole’s musicals, went on to teach dance in New York. His ‘freestyle’ dance form is still labeled as jazz dance, by many.

Eugene Facciuto, also known as ‘Luigi’, was the creator of the ‘Luigi Style’, that uses lyrical ballet to perform dance steps. The arms are lifted in line with the body, and the head is thrown back.

The use of accessories in the dance form is highly influenced by the dance steps of Bob Fosse. Bob Fosse found it difficult to perform ballet dance steps that were developed by Cole. Thus, he developed his own dancing style of turning the knees inwards and having hunched shoulders. His steps were inspired by the burlesque dancing style, that added the sensuality factor to the performance.

As the popularity of jazz dance increased, more people showed their interest in learning it. Jazz schools sprang up, and thus, the craze of jazz dancing was rediscovered. Over the years, various forms like breakdancing, hip-hop, swim, etc., have evolved from this dance form.

Today, jazz is presented in many different forms at special dance schools and performances by dance troupes around the world. Even now, this popular dance form follows the dictates of musical theater choreography. This dance technique is based on the execution of stylistic leaps and turns, and correct posture. The finesse depends largely on properly-executed moves, and strong and sharp body movements. Ballet technique works well on the downbeat of jazz music. Elements such as ‘center control’ and ‘spotting’, enables dancers to maintain balance and poise while executing powerful movements such as pirouettes and fouetté’s. The dance form requires warm up routines that are inclusive of moderate to intense stretching exercises. These are important to generate the muscle tone that adds to the grace and fullness of each move, preventing ligament injury.

Today, musical comedies and theatrical jazz have regained their position in the world of dance. Though jazz dance is believed to be an American contribution to the world of dance, it cannot be denied that, without the African influence, the world would have been devoid of this great dance form! 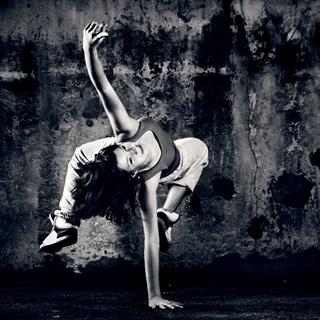 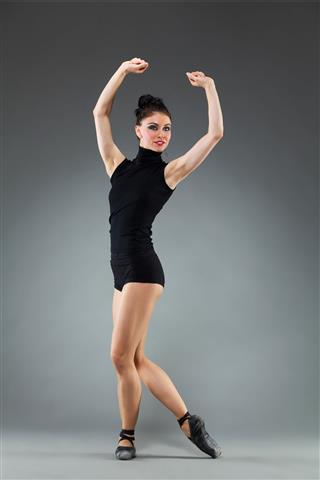 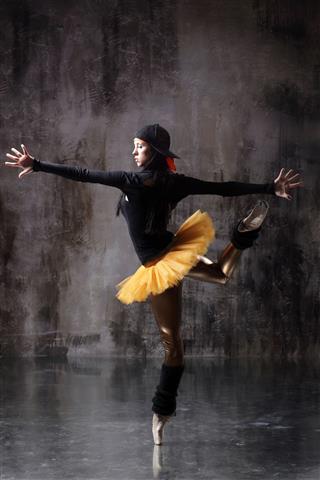